Why is it that Matt Murdock, aka The Daredevil gets so little respect? The First Appearance of Daredevil came out less than two years after Spider-man, yet you rarely see a kid wearing a Daredevil T-Shirt. You definitely don't see a gazillion alternate universe Daredevil's or get to read the exclusive Devil-Verse series.

I've always consider Daredevil to be Marvel's version of Batman. Both have had their legacies solidified by the direction of the same Writer and Artist, Frank Miller. And while Miller spent a lot more time working on Daredevil, it's overshadowed by his work on the Batman 4 part mini-series The Dark Knight Returns. Once again, Daredevil feels a bit slighted. Even when he finally makes his Major Movie debut, it flops. There is a reason that comic book geeks everywhere say the name Ben Affleck with disdain. And don’t get me started on the fact that the same guy who played Daredevil on the big screen also played Batman. Ugh!

But what if all of this was about to change? Recently Marvel turned to Netflix for a new “television” series featuring Matt Murdock as The Dare-devil. And in the blink of an eye, Daredevil has started inching closer to what he should have always been, cool and gritty; a character that you want to read more about. Especially his 1st appearance. 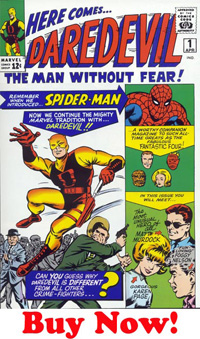 Buy the 1st Appearance of Daredevil

Daredevils First Appearance has a distinction that you don’t see very often. Created by Stan Lee with artist Bill Everett, he made his comicbook cover debut in Daredevil #1 in a solo title bearing his name as well as being Daredevil’s origin story. For those of you keeping count in our home game, that means Daredevil #1 is his First Appearance, his First Solo Title, his 1st Cover and his Origin Story. This Quad”fecta” rarely happens with a major publisher.

Daredevil #1 By The Numbers
Published April 1964
Estimated Print Run: I couldn’t not find any hard numbers, but I did find a list of the top 55 comics of 1964 by average monthly print runs which capped out at 121k. Amazing Spider-man didn’t show up on this list, so with 3 months missing from the average for the first year of Daredevil, I’d estimate that there were less than 120k printed.

Remember when I started this article off asking why Daredevil gets so little respect? Well, the thing about getting no respect is it tends to keep the values lower than all the other keys from that same time frame. As we’ve seen lately, other Silver Age Marvel First Appearances continue to raise in value. Hulk #1 anyone?

To help illustrate my point, I am going to compare Daredevil #1 to Spider-Man #1 because they match up in my estimated print run and number of graded copies so well, while showing the vast differences in values. Here is a chart with the CGC Census for all graded copies of Daredevil #1 (2750 total) and Spider-man #1 (2756 total). At the far end of the chart, we have 2 Daredevil 9.8’s and 1 Spider-man 9.8. There are no higher grades. The one thing that jumps out at me about this chart is how many more higher quality grades are available for Daredevil #1 compared to Spider-man #1. It's not until you get down to the CGC 3.5 grades does Spider-man have more available copies than Daredevil. Now I know some of you are going to say that the fact there are less higher grades of Spider-man makes it more valuable. I don't disagree, but as a newer investor I'm looking for those opportunities that have room to increase in value and that I can still afford. From this standpoint, I have a better chance of getting a reasonably priced higher grade of Daredevil, then Spider-man. Plus, I think Daredevil #1 is undervalued where as Spider-man is about where it should be.

The next chart is a comparison of the percentage difference in value for each grade when comparing Daredevil #1 vs Spider-man #1. I used GPAnalysis to get this data, but out of respect for the work they do, I did not include the actual dollar amount of the sale. Instead, I calculated the percentage difference in value between the same grades using the existing 12 month averages. There were no sales of Amazing Spider-man 9.6 or 9.8’s, so I dropped these grades from this chart. The highest comparison is for CGC 9.4’s. In cases where there were no sales for the last 12 months, I used the last years average even if there was only a single sale. With Netflix finally doing justice to the mythos of Daredevil, many believe this undervalued silver age key is poised to increase in value very soon. With the announcement that Netflix picked up a 2nd season, I think that time is right around the corner. Especially if you look at just how undervalued this issue is.

Before you finish up, I have a few questions for you. What do you think about investing in Daredevil #1? Can you name another Silver Age character from Marvel or DC with this same Quad”fecta” that is so undervalued?  And Finally, is Ben Affleck really a putz for playing both Daredevil and Batman in the movies? Share your thoughts in the comments below.