Buying the perfect gift can be a challenge, especially for those extra special people in your life. Are they a classic comic book lover of their favorite superheroes? Does Star Wars float their boat and want an action figure to add to their cool shelf? Or is a collector edition superhero T-shirt the way to go? It can be a little tricky when trying to find that perfect gift. However, if that person happens to be a gamer and a superhero connoisseur, not only are they awesome, but they’re in luck! There were plenty of hot and exciting additions to the world of superhero gaming this year, from the newest DC and Marvel games to accessories featuring the superhero stars we all know and love. Choosing the best gift for your superhero gamer is easier than you think and we’ve outlined this list of all the best superhero merch on the market this year in our gifts guide to help you out! Check out some of the greatest gifts ideas for gamers and superhero lovers in 2017!

The first gift to consider for the gamers on your list is the newest game releases. Luckily, multiple superhero-themed video games have been released for each console and PC this year. Here are a couple of the most highly rated superhero games released this year:

With Injustice: Gods Among Us being such a huge hit in 2013, it’s no secret why superhero fans were impatiently awaiting the release of this highly-rated sequel. The game features a variety of characters from the DC comics world, as well as other beloved favorites, meaning it's a great choice for most superhero fans, regardless of which hero is their top pick. The plot of Injustice 2 centers around Batman’s attempt to repair society following Superman’s defeat 5 years prior. Throughout the game, Batman is accompanied by his main companion, Cat women, and greeted by many other beloved characters along the way, such as Flash, Green Lantern, Green Arrow, Supergirl, and Doctor Fate. Other characters include popular super villains like Poison Ivy, Scarecrow, and Cheetah.

The action-filled fighting game was released for PS4 and Xbox One earlier this year and was followed by a Microsoft version for PC gamers.

Marvel vs. Capcom crossovers have been popular since their initial release, and this sixth edition to the crossover family is no different. Fans have been raving about this superhero mashup for ages, making Marvel vs. Capcom: Infinite one of the top gifts choices for superhero gaming fans this year. 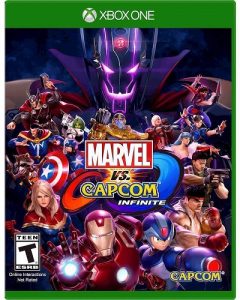 This fighting game features a two-on-two combat style and both single player and multiplayer modes, which makes it great to enjoy with friends. There is also a diverse cast list meaning you can play as your favorite superhero and supervillain characters, like Doctor Strange, Gamora, Black Widow, Thor, Venom, Hulk, and even Rocket Raccoon.

The game has been released for Xbox One and PS4 as well as PC. Okay, so this game was technically released in 2016, but with virtual reality gaming being so popular in modern gaming, this highly-rated VR version of Batman: Arkham is still more than relevant. If your gamer is into VR gaming (or if you’re totally awesome and getting them a VR headset, too!) this game is one of the best to get the full virtual experience. This action-adventure game features an immersive first-person playing experience as Batman, as well as interactions with other DC Characters like Robin, Nightwing, Penguin, the Riddler, and the Joker. As a part of the beloved Arkham series, this game has been released for both PS4 and PC gaming.

If your superhero gamers already have all the coolest and latest console and PC games, or you just want a few add-ins to spice up your gift, there are a few accessories on the market to help amp up their gaming setup, from personalized skins and stickers to game-enhancing accessories. Here are some of the latest superhero gaming accessories available this year:

This vinyl stick-on skin will dress up your Playstation 4 System with lots of color and character. The sticker features all the best DC and Marvel heroes, like Wonder Woman, Batman, Captain America, Thor, and Superman. The sticker is easy to apply and removable, so they can change it up later if they want an update, even though this enthralling skin may never get old. This Superman/Batman mashup offers a matching skin for both PlayStation 4 consoles and controllers. The skin is simple in color, displaying a bold black, white, and red design, making it perfect for both guys and girls. The design is a mix of the Batman and Superhero logo, making it great for those who just can’t quite choose a favorite. Controller skins have cutouts for buttons for a no interference design and the vinyl material offers a little extra non-slip grip for your console and controllers to protect against dropping and damage.

Like many other vinyl skins, the sticker comes off easy so that they can change up their superhero designs year after year. If you’re looking for a gift that will excite superhero fans and enhance gameplay, this high-quality hero-themed headset will do the trick. Turtle Beach is a well-known and highly rated brand of gaming headsets, which features both audio playback and microphone access for communicating in online play. In addition to Turtle Beach’s superior sound quality, though, this pair is clad with a simple, but brilliant blue Marvel superhero design. It will work great with most consoles, including Xbox 360, Xbox One, PlayStation 4, Wii, and PC. Your superhero gamer will love being able to play their favorite games in style and without interference!

Superhero Gifts for Any Gamer

There are thousands of gifts that your superhero gamers will love this holiday season, but this list really outlines the best of the best! In fact, Injustice 2 may be one of the hottest game releases this year, meaning that the Justice League console skins are crazy popular, too! Whether the gamers on your list prefer Xbox or PlayStation or they are a fan of PC gaming, there is definitely a gift on this list that they will love, which makes your holiday shopping a breeze!